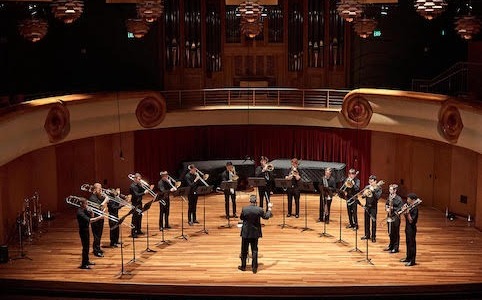 Thank you for your interest in the trombone studio at Columbus State University! Please take some time to read about the trombone studio and trombone ensembles, and be sure to visit our YouTube channel to see and hear what the excitement is all about. After doing so, please contact Dr. Palmer to set up a visit. I will be happy to meet with you for a tour of the facility and a free lesson. I believe this is a very important step for prospective students -- to come get a feel for the Schwob School of Music and the trombone studio before making the decision about where to study music in college.

Click here for audition information. Contact Dr. Palmer if you have any questions or would like to arrange a free lesson and tour of the Schwob School of Music and RiverCenter for the Performing Arts. In general, Friday afternoons and Tuesday evenings are good days to visit. You will have a chance to hear one of the trombone ensembles rehearse and meet some of the current students.

Columbus State University's Schwob School of Music offers Graduate Assistantships (GAs) for Master's Degree candidates in Performance and for Artist Diploma candidates. Assistantships cover the full cost of tuition, and also come with a stipend. This page is intended to provide more information for prospective Graduate students. After reading the information here, please contact Dr. Palmer to set up a visit. Please note that the deadline is March 1 for completing the application and audition.

Checklist for applying to CSU for the Master's degree for trombonists:

In addition to regular performances at Columbus State University, the CSU Schwob Trombone Ensemble has performed at numerous International Trombone Festivals, the 2022 Hawaii Trombone Workshop (Oahu), the 2018 Lätzsch Trombone Festival (Germany), the 2014 SliderAsia Festival (Hong Kong), the American Trombone Workshop (Washington DC), the Georgia Music Educators Convention, and at a number of churches, schools, and civic functions. The Ensemble has over fifty compositions and arrangements done specifically for the group. YouTube videos of trombone activities at Schwob have been viewed over 6,000,000 times worldwide.

In addition to their own recordings, the CSU Schwob Trombone Ensemble performed and recorded with Boston Symphony Orchestra bass trombonist James Markey in March, 2014 for his solo CD entitled "Psychedelia" and performed and recorded with New York Philharmonic bass trombonist George Curran on his 2017 solo CD "Vital Signs". Members of the Ensemble also appear on New York Philharmonic trombonist Colin Williams' 2019 CD entitled "Ash." The CSU Trombone Studio and Schwob Trombone Ensemble are under the leadership of Dr. Bradley Palmer, Professor of Trombone at CSU since 1999.

The Trombone Studio at Columbus State University has had the opportunity to work a number of fine guest artists over the years. In most cases, the guest artists will work closely with the entire trombone studio, including private lessons at no cost to the students. Several of these artists can be heard on "A Beautiful Noise" - a CD recording featuring soloists with the CSU Trombone Ensemble.

The following is a list of recent guest artists. The asterisk (*) denotes artists and ensembles that have recorded in CSU's Legacy Hall, produced by Dr. Palmer. Please note that this list does not include the artists that presented at the 2013 International Trombone Festival hosted by CSU.

Other recent visiting ensembles include:

Our CD FULL TILT is now available for download!

This music on this recording was all written for or premiered by Columbus State University trombone students. Many are new works specifically commissioned for this recording project, including "La Reconquista" which was composed by a current member of the ensemble Andrew Markel. It was through the generous backing of our supporters that we were able to raise enough money to make the CD free to everyone, as we endeavor to get some wonderful music written or arranged for trombone ensemble out there!

"Full Tilt" was commissioned by the CSU Trombone Ensemble and premiered at the 2013 International Trombone Festival at Columbus State University. It is available from Art of Sound Music.

"In Their Gentle Presence" was premiered at CSU during the 2014 Southeast Trombone Symposium.

"Four Short Prayers of Saint Francis of Assisi" was adapted from the original vocal score for the CSU Trombone Octet by Bradley Palmer and not available for purchase.

"Ave Dulcissima Maria" is the first of Three Motets by Gesualdo, arranged for the CSU Trombone Ensemble by Bradley Palmer in 2009. It is available through Cherry Classics Music.

"Harbinger" was commissioned and premiered by the CSU Trombone Ensemble in 2017. It is available from the composer's website.

"Memories of the Spirit" was composed by Brad Edwards as a memorial to Giselle Ortiz, a member of the CSU Trombone Studio that was taken from this Earth in 2013, way before her time. The premier was done by the CSU Trombone Ensemble at the 2013 International Trombone Festival with James Markey, Denson Paul Pollard, and Charlie Vernon as soloists. It is available from the composer's website.

Steven Verhelst's "The River Bells" was commissioned and premiered by the CSU Trombone Ensemble in 2016. It was selected as one of the required pieces for the 2018 ITA Remington Trombone Choir Competition. It is available on the composer's website.

"La Reconquista" was composed by Andrew Markel, an undergraduate member of the CSU Trombone Ensemble and budding composer. The piece is available through the composer's website.

"Hoorah!" was the product of a consortium led by Columbus State University to commission Jacob Ter Veldhuis to compose a new work for trombone octet and audio/video playback. It is available from the composer.

James Kazik's "Fire and Stone" was commissioned and premiered by the CSU Trombone Ensemble in 2016, and is available through the composer.

Grand Cheour Dialogué was arranged by Joshua Kearney in 2008 during his undergraduate degree at CSU. This version was revised in 2017 by the arranger. It is available through Elkjer Music Publishing.

A Beautiful Noise CD is available for purchase!       Order

This recording is the result of a six-semester synergy between students, soloists, faculty members, composers, producers, engineers, and of course a business coordinator, facilities manager, and other staff. It was only through the hard work and dedication of all of these people, along with the vision of the administration of the Schwob School of Music and Columbus State University that this massive project came to fruition. I want to thank everyone involved with the project, and also to take a moment to illustrate some of the many elements that connect the artists.

Charlie Vernon initially visited CSU for a performance of Christian Lindberg's “Chick 'a' Bone Checkout” with the CSU Orchestra under the direction of Fred Cohen. Dr. Cohen was inspired by Vernon's alto, tenor, and bass playing. The resulting piece, “Laps and Lhasa,” was begun two years later.

In 2010, Bill Thomas and George Curran, along with their Atlanta Symphony Orchestra section-mate, Colin Williams, and I formed the Southeast Trombone Symposium here at CSU. Thomas and Curran presented the American premier of Ewazen's “A Duet for Our Time” with the STS Professors Choir in 2010.

Paul Pollard and I were in graduate school together at the University of Iowa studying under David Gier, and have since collaborated many times in performance and teaching in the US and in Asia.

Alessi's solo work on the Visions CD was masterful, and one gem that came out of that project was the incredible new piece “Bright Window” that James David composed for the CD. In the early stages of planning the repertoire for the Beautiful Noise project I reached out to Dr. David to compose another piece for Mr. Alessi for this CD.

The trombone world is such a small one, and I am thrilled to have been able to bring these amazing artists in to work with my students here at CSU. The students were able to interact with the soloists— getting to know them personally as well as artistically. The soloists worked with the students in lessons and masterclasses, rehearsals, recording sessions, and performances. The conversations that happened over meals, during trips to and from the airport, in the hallways, and backstage before and after performances and recording sessions were so very important for these young musicians. I look forward to seeing the paths cross between the students and soloists on this recording as all of their careers continue to develop. The next time that happens is with the 2013 International Trombone Festival we are hosting here in Columbus, GA, where three of the soloists on this CD will be featured artists. 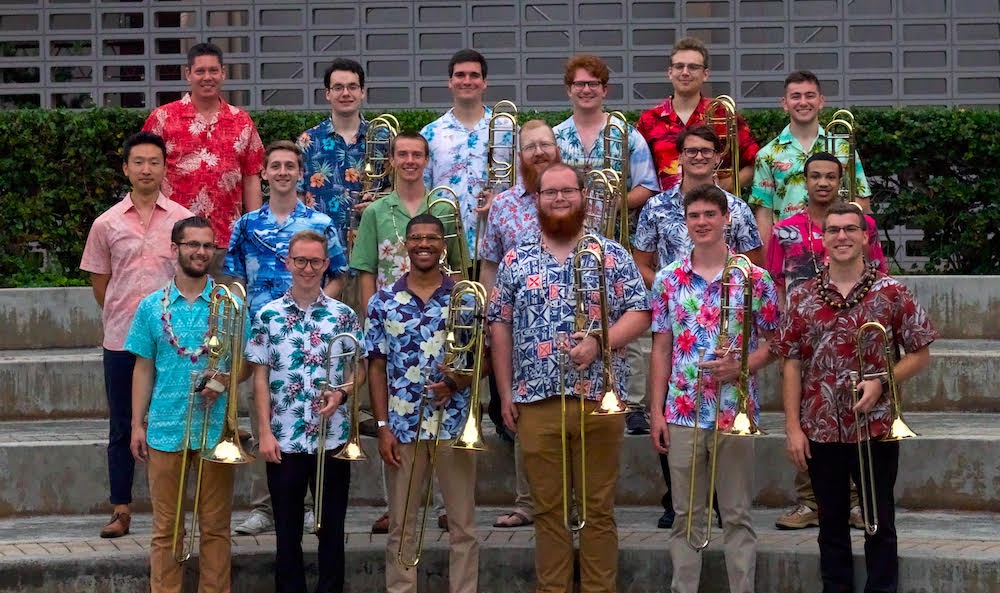