Students in the ROTC program have the opportunity to attend special schools or training on a voluntary basis during the summer and winter breaks. 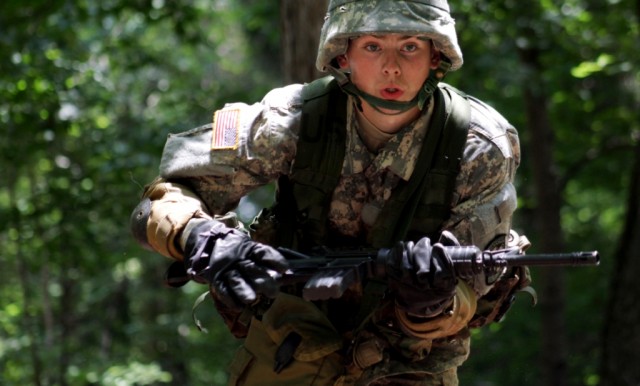 The CPDT Program consists of six general categories of leadership experiences designed to further develop Cadets, provide them
with an introduction to the "real" Army and in some cases provide them with functional skill qualifications. The six categories of training are summarized below.

(1)  Cadet Troop Leader Training (CTLT). More than 1,000 MS III Cadets participate in this program which allows them to serve in Modified Table of Organization and Equipment (MTOE) units as Platoon Leaders.

(2)  AC Opposing Forces (OPFOR). Approximately 288 MSI/II Cadets participate in this program that provides an in-depth tactical experience for BC Cadets. The AC OPFOR program is approximately 30-days in length and allows Cadets to test their leadership abilities at the fire team and squad levels from troop leading procedures to tactical operations against AC squads and platoons.

(3)  BC MS III Leader Trainers. Approximately 256 MS III Cadets serve as BC trainers for MS II squad leaders and provide them formal and informal developmental feedback. The Leader Trainer, working closely with BC cadre, is given the authority and responsibility of assisting in the training of BC Cadets.

(4)  Cadet Advanced Individual Training (CAIT). Approximately 1,000 Cadets participate in CAIT which allows them to attend functional qualification and other courses, some of which result in the award of skill badges. Some of the courses include: Airborne, Air Assault, Mountain/Northern Warfare, Sapper, and the Combat Diver Qualification Course among others as well as United States Military Academy (USMA) Cadet Field Training (CFT).

(6)  Nurse Summer Training Program (NSTP). Nursing students who are also Army ROTC Cadets have an opportunity for a unique summer nursing experience. The paid, four-week NSTP assigns approximately 200 Cadets to Army hospitals throughout the U.S. and Germany. The nursing program introduces Cadets to the Army Medical Department (AMEDD) and to the roles and responsibilities of an Army Nurse Corps Officer. Under the supervision of an experienced Army Nurse Corps Officer, Cadets obtain hands-on experience. Training opportunities include one-on-one clinical experience which enables Cadets to hone their clinical skills, develop
problem-solving techniques and become comfortable with developing professional skills as a member of the U.S. Army Healthcare Team.

Students are trained by the same platoon sergeants, section sergeants and squad leaders for all three phases of training, (ground, tower and jump). The school's teaching philosophy is designed to strengthen unit cohesion, discipline and supervision while producing quality paratroopers.

The week of 1,000 falls! You will learn how to properly exit an aircraft and perform a Parachute Landing Fall (PLF). This week will introduce you to the Lateral Drift Apparatus and the 34-foot tower.

During tower week you will conduct training on the 34-foot tower to develop your skills in exits and deploying your reserve chute, and the Swing Landing Trainer to hone your PLFs. You may also experience the 250-foot tower. This is the closest thing to jumping out of an airplane possible.

This is it! You've been training for three weeks, are you ready? You will perform five jumps this week: three "Hollywoods" (no gear), one night and one day jump, both with full gear.

A cadet obtains a slot in Airborne School by virtue of his/her performance during the school year. Only the most qualified and motivated cadets will be selected to attend the course.

Army Physical Fitness Test: Score of 260, with 80 points per event.

Able to execute 10 pull-ups to standard.

You will conduct various training evolutions such as the obstacle course followed by a 2-mile run. You will be trained and tested on aircraft hand and arm signals, Army helicopter characteristics and capabilities, and medical evacuation procedures. You will also conduct Physical Training (PT), a 4-mile road march and a combat air assault operation.

Phase II is the most difficult phase of Air Assault. You will be trained and tested on practical rigging and inspection of sling loads for Army helicopters, and on Pathfinder operations. Practical examinations will be based on inspecting various sling loads for discrepancies and participation in live sling load operation.

During the rappelling phase you will be tested on tying the Swiss seat, ramp, tower, skid rappelling, and fast-roping techniques. Before you know it you will find yourself going out of an actual helicopter. The final test for Air Assault is the 12-mile road march with full combat gear.

A cadet obtains a slot in Air Assault School by virtue of his/her performance during the school year. The battalion usually receives zero or one slots per year. Only the most qualified and motivated cadets will be selected to attend the course.

Army Physical Fitness Test: Score of 260, with 80 points per event.

Able to execute 10 pull-ups to standard.

The Army Mountain Warfare School is an Army National Guard installation on the Ethan Allen Firing Range, in Jericho, Vt. The school exists to train soldiers in the specialized skills required for operating in mountainous terrain, under all climatic conditions, day and night.

Arctic, sub-arctic, and mountain environments are brutally unforgiving to the unprepared. Units that have successfully fought in these environments have historically been those with special individual skills, and are physically and mentally tough, and have extensive experience and expertise operating in harsh conditions.

At the Northern Warfare School, you will experience training that will prepare you as a leader of units that overcome demanding cold weather and mountainous environments.