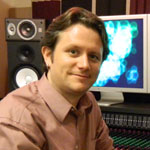 Dr. Matthew McCabe joined the CSU music faculty in the Fall of 2009 as Visiting Assistant Professor of Audio Technology. He holds degrees in music from the University of Richmond, Bowling Green State University, and the University of Florida. Trained as a composer, he has focused on electroacoustic music and the creative use of music technology throughout his career. He worked as the music technology specialist at the University of Richmond for two years after finishing his degree there, and has served as the technical director for both the Florida and Third Practice Electroacoustic Music Festivals as well as working as a recording engineer and producer. He serves on the board of the Society of Composers as a system administrator and regularly consults with Columbus-area live music venues and churches about amplification techniques.

As the coordinator of the Schwob School of Music's technology area, Dr. McCabe teaches courses in recording arts, music technology, and electroacoustic and computer music.  He also works one-on-one with students completing independent studies, internships, and creative projects using technology, including composition and electroacoustic performance practice.  The Schwob School's recording studio is also under his supervision, producing more than 250 live concert recordings per year and working on many commercially-available recordings by CSU Faculty and others who come to Columbus to record with him.  In 2010, Dr. McCabe founded the CSU Popular Music Ensemble, which has explored a variety of popular and vernacular music and mounted performances on and off-campus.  PME has explored a wide range of musical styles, including the music of Prince, Led Zeppelin, Muscle Shoals, Talking Heads, and the blues, collaborating with local artists Neal Lucas, Lloyd Buchanan, and Mike Jerel Johnson.  During the group's blues semester, students had the opportunity to do field work with the Music Maker Relief Foundation, visiting blues artists in Mississippi and documenting their lives and music.

Dr. McCabe has also studied cognitive neuroscience and music psychology and has presented research at conferences hosted by the International Neuropsychological Society and the Society for Music Perception and Cognition. Most recently, he and his collaborators published a paper on semantic-motor integration which appeared in the journal PLoS ONE.  His compositions can be found on the Centaur and Everglade labels, and his writings have appeared in Computer Music Journal, the New Grove Dictionary of American Music, PLoS ONE, and several publications from the Society of Composers, Inc.

He is also a student of the Irish Language, and in 2018 earned the A1 certification in that language from Maynooth University's Teastas Eorpach na Gaeilge.  He has spent time in language immersion programs in County Donegal, and continues to write and sing in Irish.  He performs with Columbus-based Irish music group Wolf & Clover,  with whom he plays tenor banjo and bouzouki, among other instruments.