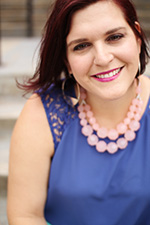 Prior to graduate work, Dr. Folta taught middle school choir for eight years in Austin, Texas, where she was recognized as “Teacher of the Year.” While teaching in the public schools, Dr. Folta was instrumental in transforming her campus into a Fine Arts Academy, preventing the school from possible closure. Her choirs received consistent superior ratings in festivals and contests during her tenure as well as many opportunities to perform with community choruses and religious organizations.

Dr. Folta was recently named a quarterfinalist for the GRAMMY Music Educator of the Year Award and Columbus and the Valley's "Rising Star" award. Dr. Folta and her husband, Zach, reside in Columbus, Georgia with their daughter, Lena.

Voices of the Valley