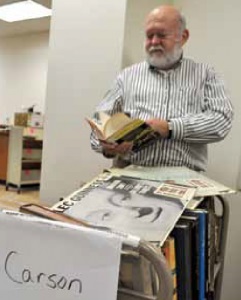 Joseph Thomas (Tom) Converse began in the CSU Archives in 2010 as a volunteer and has been a part-time archives assistant since 2011. Tom has a B.A. in Comparative Literature and a Master's in Library Science. He is also a Certified Archivist (Emeritus) and a Certified Records Manager (Retired). He began his career in archives at the Kentucky State Archives in 1979 as the head of the Kentucky Guide Project, an NHPRC-funded program to locate, describe and publish information on all archival and manuscript collections in the Commonwealth of Kentucky.

In 1985, Tom was commissioned as a Consular Officer in the Foreign Service Office of the U.S. Department of State. Between 1986 and 1991, he was posted to the U.S. embassies in Guatemala and Nicaragua and to the Consulate General in Barcelona, Spain. As a consular officer, he adjudicated requests by non-U.S. citizens for both tourist and immigrant visas as well as providing services to U.S. citizens abroad. These services included passport issuance or replacement; repatriations of destitute Americans; visits to American citizens in hospitals, prisons and jails within his consular district; fraud investigations involving citizenship or benefits such as Social Security; and arranging for the return to American soil of citizens who became seriously ill or died overseas.

In 1991, he resigned his commission to return to his archival/librarian roots. He served as the Head Librarian of the National Archives in Washington, D.C. until he accepted a position with the Inter-American Development Bank (IDB) in 1993. He served as the IDB's Archivist and Chief of the Records Management section. Until his retirement in 2009, he oversaw the Bank's records center and its archives, as well as all records-related training (in both English and Spanish) in its Washington, D.C. headquarters, in its 29 offices throughout Latin America and the Caribbean, and its European office in France. He also planned and oversaw the conversion of the Bank's records systems from being paper-based to an electronic records and documents management environment.

Tom retired to Columbus, the hometown of his wife, Myra Massey Converse. Over the 40 years (and counting) of their marriage, it is a place he visited numerous times and had come to love. He enjoys processing CSU archival collections and helping archives users with their research topics.