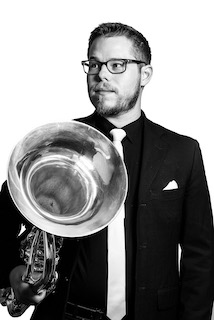 Dr. Alex Avila is an avid performer, educator, and advocate of art music. Although he began his musical studies on euphonium, doubling on tuba has become a signature of his professional career. Dr. Avila distinguished himself by placing in several regional, national, and international music competitions, notably earning first prize in the prestigious Leonard Falcone Festival Competition. He has also been a finalist in professional auditions on both instruments with Pershing’s Own and The Austin Symphony Orchestra.

As a soloist, Dr. Avila has been featured with The University of Georgia Wind Ensemble, The Austin Symphonic Band, The Chesapeake Bay Wind Ensemble, and has performed recitals across the U.S. His recitals use theme, narrative, and multimedia elements to explore a balance between tradition and modernity, appealing to a broad artistic spectrum. His latest performance, “Music for Two Big Instruments,” pairs 21st century music with prose, poetry, and visual art.

Chamber music is an essential component of Dr. Avila’s musical identity. He has performed with a variety of small ensembles in settings ranging from the concert hall to a viking boat sailing across a lagoon. His most active chamber group is the genre- bending quartet, FivE, that has garnered national attention for their creativity and ability to entertain audiences of all types. With FivE, Dr. Avila is constantly challenged to integrate outstanding musicianship with design and theater elements and to think about the future of classical music in society.

Dr. Avila currently serves as Lecturer of Tuba and Euphonium for The Schwob School of Music at Columbus State University. Prior to this appointment he had a similar role at Texas A&M University - Kingsville and freelanced in the Austin metropolitan area. Dr. Avila received his bachelors degree in music education from The University of Georgia and graduate performance degrees in both euphonium and tuba from The University of Texas at Austin.