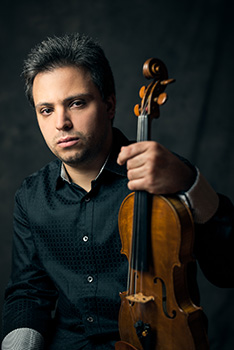 Hailed as "a violinist of outstanding technical accomplishment and exceptional musical talent" (Fanfare Magazine), violinist Boris Abramov has established himself in recent years as a young promising artist, performing across the world as a soloist as well as a chamber and orchestral musician. Born in Baku, Azerbaijan in 1989, Mr. Abramov immigrated to Israel in 1990, and began studying the violin at the age of 6 with Stella Zlatkovsky. Since 2001, Mr. Abramov received annual scholarships and prizes from the America-Israel Cultural Foundation and was declared second prize winner in Israel's Rising Star National Music Competition in 2004. Mr. Abramov has been heard on Israeli Radio broadcasts, playing chamber music at the Jerusalem Music Center, and at age 16, served as Concertmaster of the Israel Youth Philharmonic Festival.

At the age of 17, Mr. Abramov continued his studies at the Schwob School of Music, Columbus State University in the United States, where he completed his bachelor's (cum laude), master's and artist diploma degrees with the renowned violinist and pedagogue Sergiu Schwartz. Since his move to the United States from his native Israel, Mr. Abramov has participated in several music competitions as a soloist, winning several awards at the national and international level including the National Winner of the MTNA (Music Teachers National Association) Competition for strings in 2008 in Denver, CO, and a Special Prize at the 2009 Pablo de Sarasate International Competition in Pamplona, Spain.

Boris Abramov's recent album, Mozart-Beethoven Violin and Cello Duets with the renowned cellist, Carmine Miranda was released to critical acclaim by Navona Records and was awarded the Silver Medal at the 2017 Global Music Awards and nominated for a Hollywood Music in Media Award.

Mr. Abramov currently serves as principal second violinist of the Columbus Symphony Orchestra and as Professor of Violin at the Schwob School of Music, Columbus State University (USA).

Mr. Abramov performs on a violin made by Anthony Wrona in 1959, in Buffalo, New York.