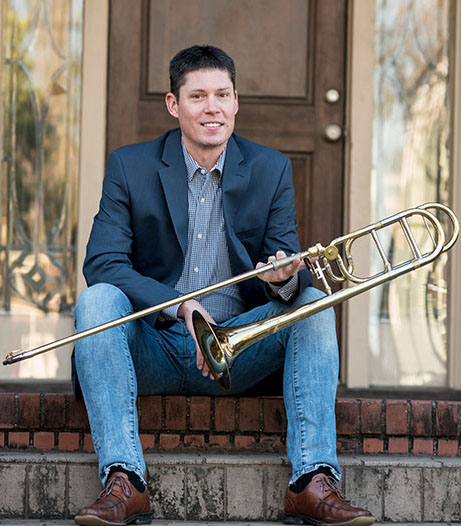 Dr. Bradley Palmer is Professor of Trombone at Columbus State University's Schwob School of Music, where he has led and developed the trombone studio since 1999. He earned his bachelor's degree in music from Millikin University, his master's degree from the University of Iowa, and he completed his doctoral work at Florida State University.

An S.E. Shires Performing Artist, Dr. Palmer has appeared as a soloist in the United States, Canada, Brazil and Hong Kong. He has also performed many times in Europe and the UK. Dr. Palmer performs regularly with a number of orchestras in the Southeast and has held the principal trombone chair with the LaGrange Symphony since 2003. He has performed with many other orchestras including the Alabama Symphony, Atlanta Symphony, Columbus Symphony, Jacksonville Symphony, Macon Symphony, and the Savannah Philharmonic. He has performed at seven International Trombone Festivals, and served as the host for the 2013 and 2021 Festivals at the Schwob School of Music at CSU. He can be heard as a soloist on Summit Records, and has appeared on St. Louis Symphony bass trombonist Gerry Pagano’s CD entitled “Ubiquity” (2014) and on Pagano's 2016 release "Horizons" performing music for two trombones and piano.

Along with members of the Atlanta Symphony and New York Philharmonic trombone sections, Palmer serves on the faculty of the Southeast Trombone Symposium and conducts the STS Professors Choir. In addition to a busy performance schedule, he enjoys presenting master classes, clinics and serving as an adjudicator from solo and ensemble competitions to marching band competitions. He has guest conducted performances with trombone ensembles at many schools in the US including Juilliard, in addition to groups in Canada, China and Brazil. He has served as a member of the brass staff of the Phantom Regiment, Pioneer, and Glassmen Drum and Bugle Corps. His arrangements for trombone ensemble are published by Cherry Classics.