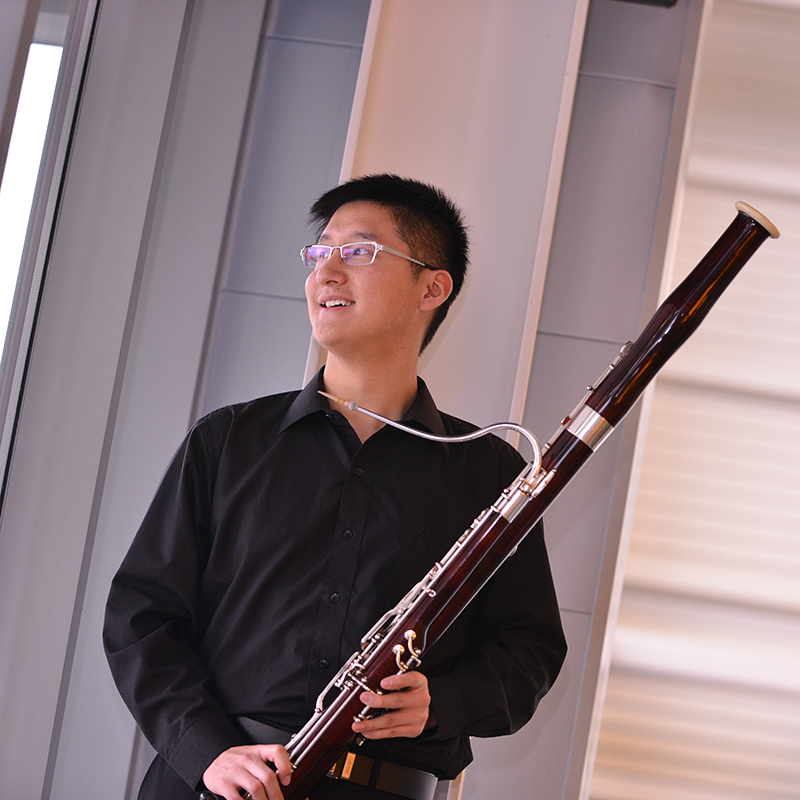 Myles Mingyuan Yang is the visiting assistant professor of bassoon at Columbus State University Schwob School of Music. Before he joined the faculty at CSU, he served as the associate instructor at Indiana University Bloomington for four years where he earned his DM degree in Music Literature and Bassoon Performance with minors in Music Theory and Music Education.

He was the First Prize winner at the International Double Reed Society (IDRS) Young Artist Bassoon Competition held at the University of Redlands, California in June 2013. Besides his DM degree from Indiana University (currently in candidacy), he earned his Master of Music from Yale University and Bachelor of Music from Western Michigan University. His primary teachers included William Ludwig, Kathleen McLean, Frank Morelli, and Wendy Rose. He was one of the three winners in the WMU School of Music both 54th and 56th Annual Concerto Competition. His performance of Mozart bassoon concerto in B-flat major and Hummel bassoon concerto in F major with university orchestra were both broadcasted by National Public Radio Station (WMUK). He also performed Concerto in e minor by Vivaldi at the IDRS conference 2013. He became a member of the International Double Reed Society in 2013 and he was invited to become a member of Pi Kappa Lambda (National Music Honor Society) in April 2016. In his orchestra career, Yang worked with many leading conductors including Peter Oundjian, Marin Alsop, Ludovic Morlot, David Robertson, Ignat Solzhenitsyn, and many more. He currently holds the principal bassoon position at Dubuque Symphony Orchestra. He served as a member of the DSO diversity, equity, and inclusivity committee. He also held the principal position at Carmel Symphony, Indiana; the second bassoon position with Lansing Symphony, Michigan, and Acting second with Columbus Indiana Philharmonic, Indiana. In 2022, he toured with Puerto Rico International Chamber Orchestra. Many of his ensemble performances were live-streamed internationally through CBS and other television / online channels.

Yang is a scholarly arranger and editor of modern performing editions and creates new solo repertoire for the bassoon. He recently finished arranging all eight Mozart wind concertos for bassoon and was published by Potenza Music. His achievements in expanding bassoon repertoire and his innovative ways of reed making were reported by the major newspapers in China, such as Chutian Metropolitan Daily, Orient Today, Zhengzhou Evening News, Shandong Business Daily, and Music Weekly.

Yang is a founding staff member of the National Youth Orchestra – China. He worked with the orchestra for many years and he is the current orchestra manager of NYO China.