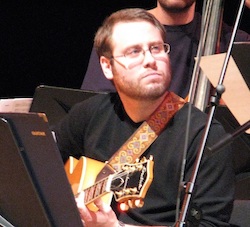 Ben Weatherford is currently the adjunct Professor of Jazz Guitar at Columbus State University, where he teaches Jazz and contemporary music concepts to both Jazz and Classical guitar students.  He is a sought after educator that teaches at multiple institutions in the region.  Ben has been a featured guest artist and clinician at Jacksonville State University as well as Columbus State University and has performed with John Faddis, Jerry Bergonzi, Anat Cohen, Nnenna Freelon, and John Mayer.

In addition to Jazz Education, Ben Weatherford is a working musician that performs in multiple genres and ensembles throughout the southeast.  This professional experience informs his Jazz Guitar Studio providing students important insight into the skills necessary to flourish as a professional musician.  Ben holds a Master of Music in Jazz Studies from Georgia State University and Bachelor of Music in Guitar Performance from Berklee College of Music.

Since moving to Georgia in 2003, Ben has been an active member of the Atlanta music and education community. For over 12 years he has taught private lessons, small ensembles, improvisation, composition, and arranging. Ben received a Master's degree in Jazz Studies from Georgia State University in 2011, where he was also a graduate assistant.

In 2012 he was hired as faculty in the music departments of Jacksonville State University in Alabama, Atlanta Institute of Music, and Columbus State University in Georgia. In addition to actively teaching and performing in the Atlanta area, he has experience in multiple music genres as well as receiving film scoring credit in the feature film Good Intentions and theater experience with the Atlanta Lyric Theater, The Wesleyan School, and Georgia Perimeter College.