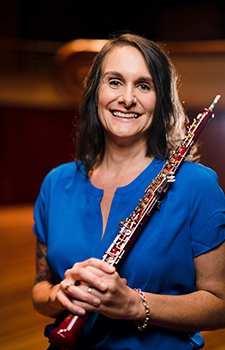 Dr. Susan Hatch Tomkiewicz is the Professor of Oboe at the Schwob School of Music and the Associate Dean of the Honors College at Columbus State University.

An active proponent of new music, Susan has commissioned, premiered and recorded many new solo, electronic and chamber works for oboe and English horn by such composers as James Ogburn, Nathan Hudson, Brian Cherney, Brooke Joyce, Bruce Pennycook, Jeremy Baguyos, Matt McCabe, John Lato, Nancy Galbraith and Fred Cohen. She looks forward to the world premiere of Alyssa Morris's Chrysalis for English horn and chamber ensemble with the Schwob Contemporary Ensemble on April 4th, 2020, at 7:30pm in Legacy Hall and Oscar Navarro's Legacy for Oboe and Concert Band with the Schwob Wind Ensemble on April 30th at 7:30pm also in Legacy Hall. She will also present a faculty recital on February 9th, 2020, 4:00pm in Legacy Hall featuring French works for oboe and English horn.

As a performing artist, Susan has been a recitalist at the International Double Reed Society, SEAMUS, Electronic Music Midwest, the College Music Society and the Annual English Horn Masterclasses with Carolyn Hove. She has also performed with a number of ensembles and productions across the country including the Omaha Symphony, Wicked, the Austin Symphony, the Maine Chamber Ensemble and the Bangor Symphony and is currently acting English Horn and Assistant Principal Oboist of the Columbus Symphony.

Susan has participated in numerous recording projects including Bells for Stokowski, Fandango, the PBS Texas Parks & Wildlife theme show music and, Rebecca Henderson's latest CD entitled 'Gobo' and is in the process of completing the final few recordings before the release of her new CD. Susan is thankful to have been the host and director of the English Horn Masterclasses with Carolyn Hove for five wonderful years and was the proud host of the Conference of the International Double Reed Society held in Columbus, Georgia in 2016. University of Texas at Austin, where she graduated summa cum laude, the University of New Mexico and the University of New Hampshire. Her primary teachers include Rebecca Henderson, Kevin Vigneau and Margaret Herlehy.