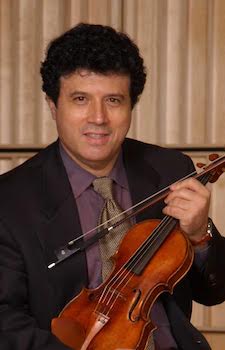 Professor & The William B. and Sue Marie Turner Distinguished Faculty Chair in Violin

Sergiu Schwartz’s international concert appearances have taken him to major music centers on four continents, including twenty European countries, Israel, Asia, Canada, and over forty U. S. states, as soloist with orchestras, in recitals and chamber music concerts. “Following in the footsteps of his fellow countrymen Itzhak Perlman and Pinchas Zukerman, he is a product of the best of European romantic interpretative style and 20th-Century American technical acuity,” states New York’s Newsday, while Le Soleil (Canada) notes that “he stands out as one of the best violinists of his generation.” Comparing him to the greatest violinists, Fanfare - The Magazine for Serious Record Collectors, writes: his “warmth of sound and insight into the music raise to the level of expression achieved by Oistrakh” and his “tonal sheen approaches Milstein’s… for those who lament the passing of the great violinists of the middle of the last century, Schwartz’s collection should provide a great sense of optimism that a younger violinist still commands such assured rhetoric and expressive resources. Heifetz, Milstein, Oistrakh, Isaac Stern, Francescatti – they all come to mind.”

Sergiu Schwartz is a frequent guest at music festivals in the United States, Israel, Switzerland, Finland, England, France, Holland, Romania, Bulgaria and China, and serves on the artist faculty of the Bowdoin (Maine), Summit (New York) and Keshet Eilon (Israel) international summer music festivals. Mr. Schwartz has been featured in broadcasts for radio and TV stations, including NPR, CNN, WXEL-TV’s “Great Performances,” and the BBC. His honors include prizes in international violin competitions in the United States and Europe, as well as awards from the National Endowment for the Arts and the National Foundation for the Advancement of the Arts.

Mr. Schwartz made his recording debut with the London Symphony Orchestra with an “all Scandinavian” compact disc released on Vox Unique (reissued on Vox Allegretto and ArkivCD), featuring music by Sibelius, Svendsen, and Grieg. His discography, released to exceptional critical acclaim, includes on Romeo Records - Romantic Treasures, The Heart of the Violin and Poème Mystique - and on Gega, - The Romantic Violin. His American Classics release on Naxos features works by American composer John Alden Carpenter; and his CD on Arcobaleno showcases works for violin and harp by Ludwig Spohr.

Sergiu Schwartz studied with Rami Shevelov at the Rubin Academy of Music in Tel Aviv, Israel, where he also gained exposure to artists such as Isaac Stern and Yehudi Menuhin during master classes at Jerusalem Music Center. He continued his studies, under a British Council grant, with Yfrah Neaman at the Guildhall School in London, and, with Dorothy DeLay, at the Juilliard School in New York, through scholarships from the America-Israel Cultural Foundation and the Juilliard School. His musical growth has been further enhanced by violinists Sandor Vegh and Felix Galimir, pianist Leon Fleisher, and legendary conductor Sergiu Celibidache.