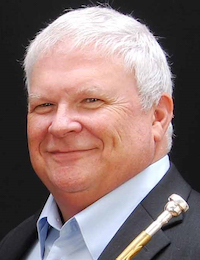 Robert Murray is the Professor of Trumpet at Columbus State University.

Dr. Murray’s trumpet studios have established a reputation for excellence; his students have participated and competed successfully at the state, regional, national and international levels and been honored as finalists in the College, Masters, Jazz and Ensemble Divisions at the National Trumpet Competition and performances at the International Trumpet Guild Conference along with participation in the World Association of Symphonic Bands and Ensembles International Wind Orchestra, the Aspen Music Festival, the Rome Music Festival, the Dublin International Symphonic Festival, the Symphony Orchestra of the Academy of the Pacific in Canada, Busch Gardens, the Big Fork (Montana) Summer Playhouse, the Henry Mancini Institute and Glen Miller Orchestra. His students can also be found pursuing successful careers across the country as music educators at the public school and university levels, as performers with major musical organizations in a variety of genres and as specialists with high profile trumpet manufacturers.

Praised for his “golden tone” and “convincing performances” he has been a featured performer, soloist and clinician at conferences of the International Trumpet Guild, the World Association of Symphonic Bands and Ensembles (WASBE) and the British Association of Symphonic Bands and Ensembles (BASBE). He has presented at international sessions of the Historic Brass Society and served as a faculty member of the Trumpet Institute “Exploring Trumpet in Greece” as well as a visiting faculty artist at The University of Missouri-Kansas City Conservatory of Music. Recent solo performances include J.S. Bach’s Brandenburg Concerto No. 2 with the Georgia All-College Orchestra at the Georgia Music Educators Association conference in Savannah, Georgia.

He and his wife, oboist Lauren Murray, perform together as the duo Harmonie del Sur. Hailed for their “wonderful music rapport”, “impeccable intonation”, and “exquisite performances” they have been recipients of numerous new works written specifically for their combination of instruments; they have performed at Carnegie Hall, the Lincoln Center and Merkin Hall in New York City. They have also appeared as performer/presenters at a variety of international conferences as well as recitals and masterclasses at universities across the US. Recently named “Performing Partners” with Co-Op Press they have performed as soloists with the Lone Star Wind Orchestra in Dallas, Texas and the LaGrange Symphony Orchestra in Georgia. In May of 2012, they served as hosts of the 37th Annual Conference of the International Trumpet Guild Conference held in Columbus, Georgia.

Dr. Murray has performed with the Colorado Symphony Orchestra and the Oregon Symphony; he has served as principal trumpet with the Owensboro Symphony, the Orquesta Sinfonica de Mineria in Mexico City, the Portland Opera Orchestra, and Opera Colorado. As a member of the Dallas Brass, he toured the United States and made frequent guest artist appearances with orchestras such as the Cincinnati Pops and Florida Philharmonic. His other performing experiences include performances with Ray Charles, Cab Calloway, Liberace, the Moody Blues, Doc Severinsen, Bernadette Peters, Quincy Jones, the big bands of Jimmy and Tommy Dorsey, and numerous Broadway productions.

Dr. Murray’s biography appears in the newly published “Trumpet Greats” a biographical dictionary of trumpet luminaries dating back to 1542 edited by international trumpet scholars Ed Tarr and David Hickman. Dr. Murray has also received an Award for Excellence from the Fort Benning Maneuver Center for Excellence. Among his teaching awards are a Special Commendation from the Colorado House of Representatives and the 2007 University of Northern Colorado College of Performing and Visual Arts Scholar of the Year. In the past year, Dr. Murray spearheaded the successful efforts of Columbus State University to become the new home of the International Trumpet Guild Archives and has begun the process of cataloging and preserving this historic collection. In 2014, Dr. Murray became a Performing Artist endorsed and sponsored by the P. Mauriat Musical Instrument Company of Paris, France and successfully secured Columbus State as the site for the 25th National Trumpet Competition in 2016.

Dr. Murray takes special pride in his ongoing commitment to music education through his recorded performances on the “Teaching Music through Performance in Band” series and “WindWorks” recordings published by GIA.

He received his Doctor of Musical Arts degree in trumpet performance from the University of North Texas, with previous degrees earned through studies at Portland State University and the University of Washington. He studied trumpet with Keith Johnson, Gerald Webster, Fred Sautter, and Roy Cummings. Other major musical influences and mentors are Eugene Corporon, Bryan Johansen, William Tuttle and Bill Bissell.