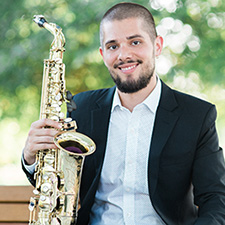 Dr. Joe Girard is a concert saxophonist who enjoys a rising career as a soloist, chamber musician, and educator. His solo and chamber performances have taken him around the country and across the globe, appearing as a soloist with the Reno Philharmonic, Dallas Winds, Columbus State University Philharmonic and Wind Ensemble, University of Michigan Symphony Band, and the Paris Republican Guard Band, among others. In April 2019, he appeared as a soloist with the Columbus Symphony Orchestra on Glazunov's Concerto and Ibert's Concertino da Camera.

As an active chamber musician, and tenor saxophonist of the Sinta Quartet (SQ), he received first prize at the 2013 Concert Artists Guild (CAG) Victor Elmaleh Competition in New York City. As a result, SQ presented their Carnegie Hall debut at Weill Recital Hall in November 2014 and is now professionally managed by CAG. SQ also won a gold medal at the 2018 Fischoff Chamber Music Competition, first prize at the 2017 M-Prize International Chamber Music Competition, the Alice Coleman Grand Prize at the 2013 Coleman Chamber Music Competition, and first place at the 2012 North American Saxophone Alliance Quartet Competition. SQ can be heard on the premiere recording of William Bolcom's Concerto Grosso for Saxophone Quartet and Band with the University of Michigan Symphony Band and conductor Michael Haithcock on the 2011 recording Artifacts. The group has been featured on WQXR's Young Artists Showcase with Bob Sherman, in addition to their live performances being broadcast regularly on American Public Media's Performance Today. The group released their debut CD, Collider, in 2019 and their second album, Ex Machina, in 2020.

As an educator, Dr. Girard has presented masterclasses and clinics across the United States, including at the Brevard Music Center, Eastman School of Music, University of Michigan, University of Massachusetts – Amherst, and the University of Miami Frost School of Music among others, in addition to internationally at the Conservatori de les Illes Balears, Conservatoire de Paris, and Conservatoire de Versailles. He is dedicated to community engagement and education and regularly works with elementary, middle, and high school students around the country to nurture their curiosity in the arts.

Dr. Girard received his Doctorate from Michigan State University where he served as a teaching assistant to Joseph Lulloff and was awarded a Dissertation Completion Fellowship. He completed his Master and Bachelor of Music at the University of Michigan under the tutelage of renowned saxophone pedagogue Donald Sinta, serving as a teaching assistant during his master's studies. Additionally, he received a Bachelor of Science degree in Mechanical Engineering from the University of Michigan and applies many concepts from the sciences to his teaching and performing. He is a Selmer Performing Artist and performs exclusively on Selmer Paris Saxophones.