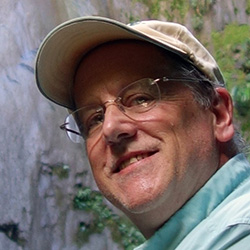 In the mid-1980s I began archaeological research in tropical montane forests and Andean páramo grasslands loosely corresponding to the pre-Hispanic the Inka Province of Chachapoyas commonly regarded as an ethnohistoric and archaeological culture area. The Inka province extended north and south approximately 300 km (200 miles) along the Huallaga and Marañon river divide at the time of European conquest. Much of this steep, wet terrain was regarded as ill-suited and inimical to sustainable settlement. Prior to 1960, scholars speculated that the forested slopes were either devoid of permanent populations, or that ancient settlements represented brief attempts at colonization during the final centuries of the pre-Hispanic era.

My work as a graduate student at the University of Colorado at Boulder, and Yale University questioned these notions, and focused on sites in and around Peru's Rio Abiseo National Park. Analysis of the combined assemblages of archaeological data and stratigraphy from investigated settlements at Gran Pajatén (ca 400 BC-AD 1536) and Las Papayas (ca. AD 1300), rockshelters of Chirimachay (ca. AD 700) and Manachaqui Cave (ca 10,250 BC - AD 1536), La Playa and the tombs of Los Pinchudos (ca. AD 1530), allowed construction of the longest and most complete stratified sequence of local cultural development recovered from Peru's forested northeastern slopes. In the from 2,600 m to 3,700 m, area inhabitants utilized rockshelters, and built settlements, cliff tombs, terrace networks, and roads on monumental scales. The sequence undermines speculative historical narratives that judged the region remote, isolated, and inconsequential in the developmental context of pre-Hispanic Andean civilization. We can now see that the park's pre-Hispanic inhabitants enjoyed coveted access to high and low altitude production zones, as well as to trade and communication networks that linked North Andean, South Andean, Coastal, and eastern Amazonian societies. Today, the park is an uninhabited archaeological time capsule and center of extraordinary biodiversity. It has been recognized as World Cultural Heritage, Natural Heritage, and a Biosphere Reserve by UNESCO.

My recent collaborative research at mid-elevations in and around the archaeological and ethnohistorical culture area of Chachapoyas has aimed to evaluate the effects of regional short- and long-term climate shifts on community mobility, land-use, subsistence strategies, conflict, and sociopolitical change through time.