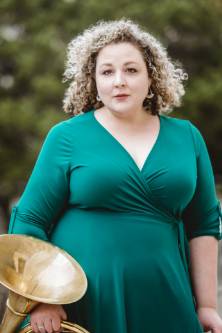 Anne-Marie Cherry is a versatile performer and educator enjoying a varied career as a soloist, chamber/orchestral musician, clinician, and recording artist.  She performs with orchestras nationwide, including recent engagements with the Kaleidoscope Chamber Orchestra, Spokane Symphony, and ProMusica Chamber Orchestra. Dr. Cherry spends her summers performing with the Breckenridge Music Festival Orchestra as Associate Principal Horn, and a member of Breckenridge Brass Quintet.

As a soloist, she has performed with the Iowa Center for New Music, the Bainbridge Symphony, Texas Chamber Group, USC Wind Ensemble, UT New Music Ensemble, and the UT Jazz Orchestra. Additionally, she is the featured solo horn on the soundtrack of the upcoming film The Last Full Measure. Anne-Marie can also be heard on City People by Greg Johnson, the UT Wind Ensemble recording of John Corigliano’s Circus Maximus, and a soon to be released album of the chamber works of Zack Stanton.

A strong advocate of performer/composer collaboration, Anne-Marie frequently commissions new works for the horn in diverse contexts. She has collaborated with composers such as Zack Stanton, Hermes Camacho, Dennis Llinas, and Gabriel Santiago—and was the dedicatee of the ASCAP winning “Northern Impressions Suite,” which she recorded in the fall of 2009 with the University of Texas Jazz Orchestra.  Another commission, Stanton’s Trio for Horn, Harp and Viola was recorded this summer and for an upcoming album of the composer’s chamber works.

Previously, Dr. Cherry has been on the faculties of The University of Texas at Austin, Spokane Falls Community College and Pasadena City College. An active guest artist & clinician, she explores mindfulness in music performance and practice with students and teachers around the country.

Dr. Cherry completed her D.M.A at the University of Southern California, crafting a unique course of study in horn performance, music education, arts leadership, and contemporary music studies.  A proud longhorn alum, she received her M.M. and B.M. from The University of Texas at Austin Butler School of Music.