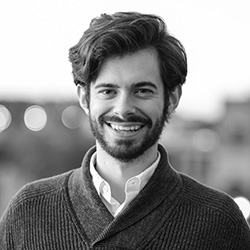 Sam Brown is the Piano Instructor and Arts Department Chair at Rainey-McCullers School of the Arts in Columbus, Georgia. In 2015 Sam graduated with a Bachelor of Music in piano performance from Bob Jones University, where he won the annual commencement contest in 2012 and served as a collaborative pianist.

During his time at BJU Sam sang in the graded choral program and developed a love for choirs. In his last year as a piano accompanist, he performed with Eliezer Yanson and the University Singers on Perelman Stage at Carnegie Hall. In 2017 Sam earned his Master of Music in piano performance from Columbus State University’s Schwob School of Music where he served as the collaborative pianist for the Voices of the Valley Children’s Chorus, under the direction of Dr. Michelle Folta, and the CSU Choral Union, under the direction of Dr. Ianthe Marini and Constantina Tsolainou. Sam has worked extensively as a rehearsal accompanist for choral masterworks including Verdi’s Requiem, Mozart and Haydn’s Te Deum, Bruckner’s Mass in E Minor, and Mozart’s Missa Brevis in F Major.

In 2019, Sam returned to the Schwob School of Music as part-time faculty to teach secondary piano at the university level. Sam is an active member of national and regional associations (MTNA, NAfME, American College of Musicians, and Arts Schools Network) in addition to serving on the board of the Youth Orchestra of Greater Columbus. In 2017 and 2018 he received a Top Teacher award from Steinway & Sons in recognition of his establishment of the Rainey-McCullers School of the Arts piano studio and his students have received top ratings in local, regional, and state competitions. Sam’s teachers include Maureen Penix, Peter Davis, Norman Krieger, Tatiana Muzanova, and Alexander Kobrin. In his free time, Sam plays competitive badminton and enjoys spending quality time with his wife Sarah, their newborn son, and their three cats.